The Exchange: The BHC Weblog

Book event: Big Business and Dictatorships in Latin America A Transnational History of Profits and Repression

Call for panelist for #BHC2022MexicoCity

We are looking for an additional member to form a panel on twentieth-century regulation/consumer safety, especially in a medical context (US or non-US), for the 2022 BHC. We are especially interested in work that explores interactions between state and private interests in the form of regulation or public-private partnership.Currently, one presenter (a doctoral student at the University of

CFP: The Newberry Seminar in the History of Capitalism

History of Capitalism Seminar 2021-2022 CALL FOR PROPOSALS Submission Deadline: Friday, June 4, 2021This seminar is a forum for works-in-progress in the history of capitalism, broadly defined. We seek proposals from junior, mid-career, and senior scholars as well as graduate students from a wide variety of sub-fields, including the history of race & racism, gender and feminist studies,

Virtual seminar: ‘The History of the Corporation’

The Yale Law School and CGCG are presenting a virtual workshop on ‘The History of the Corporation’ on 10 June 2021, beginning at 9:00 EDT.  The program follows.  All are welcome to register for the event by visiting the following website:  https://bit.ly/2PeXhGL  IntroductionNaomi Lamoreaux (Yale University)Henry Hansmann (Yale Law School and ECGI)Shareholder Democracy under Autocracy:  Voting

Annual Meeting of the Economic History Association in Tucson, Arizona, October 29-31, 2021Approaching Deadline: May 15th!The dissertation session, convened by Martha Olney (University of California, Berkeley) and Steven Nafziger (Williams College) will honor six dissertations completed during the 2020-2021 academic year. The submission deadline is May 15, 2021. The Allan Nevins and Alexander

Over the Counter, the Business History Conference newsletter 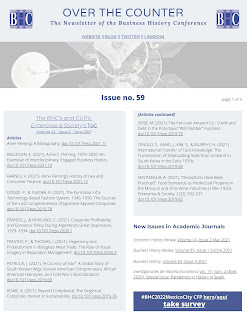 OVER THE COUNTER NO.59
The Business History Conference April newsletter includes
Reach out to the editor Paula A. de la Cruz-Fernández
Help us amplify our audience by connecting with us and sharing this newsletter
BHC LinkedIn Page
H-Business
BHC Twitter
BHC blog The Exchange

Over the Counter, the Business History Conference newsletter

OVER THE COUNTER NO.59The Business History Conference April newsletter includesNew issues in academic journalsLinks to recent Interviews and PodcastsA new MEET THE OFFICERS interview with Dr. Benjamin Waterhouse#BHC2022 CFPReach out to the editor Paula A. de la Cruz-FernándezHelp us amplify our audience by connecting with us and sharing this newsletterBHC LinkedIn PageH-BusinessBHC TwitterBHC

The University of Illinois Foundation announces the 2020-2021 John Rovensky Fellowships.  Two $10,200 fellowships will be awarded for doctoral students writing their dissertations in U.S. business or economic history.  The fellowships are available

largely through the generosity of the late John E. Rovensky and are administered by the University of Illinois Foundation.  Awardees may use the fellowship concurrently with other funding sources, including grants or teaching assignments.

Applicants must be working toward a Ph.D. degree with U.S. business or economic history as the area of major interest. Fellowship recipients must be enrolled in a doctoral program at an accredited college or university in the United States. Preference will be given to applicants who are preparing for a career in teaching and research and who will have completed all graduate course work prior to the fall of 2021. Awards are non-renewable but may be taken along with other fellowships from other sources.

The Rovensky Fellowship Selection Committee is composed of seven scholars in American economic and business history:

Applicants are judged on the basis of the following criteria:

• Academic ability and interest in business and/or economic history, documented in one letter of recommendation

• Demonstrated ability in research and writing

• Potential for a career in teaching and academic research, supported in the letter of recommendation

Application forms may be found on the Web at www.thebhc.org/awards/rovenapp.html.

Completed applications for the fellowship must be received no later than Wednesday, June 30, 2021. Winners will be notified by email by August 2020.  All materials, including the letter of recommendation, should be uploaded in the following link: https://thebhc.org/john-e-rovensky-fellowship-application

John E. Rovensky grew up in Pittsburgh in a family of modest circumstances, entered the banking profession, and moved to New York City. There he became the youngest vice president of the National Bank of Commerce, at the time the second-largest bank in New York City. He later served with the Bank of America and National City Bank of New York. At the close of a very successful banking career, Mr. Rovensky became chairman of the executive committee of American Car and Foundry Company (later ACF Industries) and subsequently chairman of the board. Retiring from active business interests in 1954, he still retained a lively interest in economics, public affairs, and the academic profession. He died in 1970.

Inquiries may be directed to: